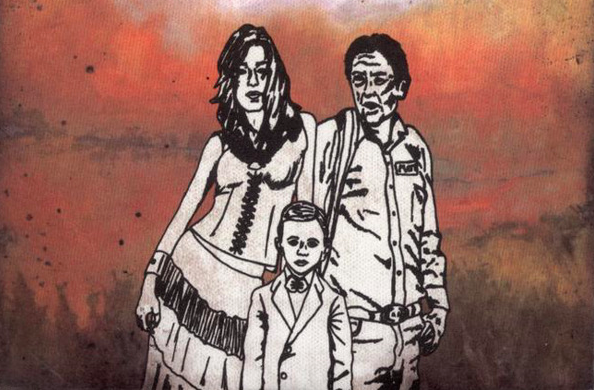 I feel like I can’t write about The Early November without writing about everything. It’s intimidating. It’s demanding. I have resolved to do it less often. Anyone who knows me even a little bit knows what my favorite band is, even if they don’t know why. It doesn’t take much for me to talk about their music. That’s normal stuff—they’re a band with a few albums and a bunch of songs; they play some of those songs in various locations; I go to them or I don’t; I listen to the music regardless. I can talk about the times I’ve seen the perform, about the songs I wish they’d play more and the ones they could maybe give a rest. I can quote lyrics at the drop of a hat. I can sing you whole songs, any of them, and I will without request.

I knew this day was coming. I knew I couldn’t let July 11, 2016 pass without writing something about The Mother, The Mechanic, and The Path. So, I’ve been thinking about what makes a favorite band a favorite band. The difference between a person with favorite bands and a person with a capitol F capitol B Favorite Band. One is not better than the other, but there is a difference. Some people have rotating favorites, a handful of artists that really do it for them. Some have new favorites and old favorites. Some people have a Favorite Band. I don’t know why it happens, but it does.

The Early November is my capitol F capitol B Favorite Band, and The Mother, The Mechanic, and The Path is my favorite record. It has been that way for ten years, ten years today. I don’t know if it was instant, but it was close enough. I vividly remember my sister opening that package, a CD digipack heavier than usual. It had the weight of a small book. A note apologizing for the lack of Tee shirt, apparently they had not been manufactured yet and they would be sent out at a later date (my sister never did receive that shirt, and oh does she remember it). I remember listening to certain songs in her red mustang on the way to the store or to swim practice. “Money in His Hand” and “Decoration” and “Hair.” I remember my sister asking what my favorite song was and thinking Danielle there are literally 46 fucking songs on this thing how in the world can I choose just one?

These are the facts and I’ve typed them out before. I know what happened in my life and I know how all the songs go. I know them a billion times over. But the connection from a) my life to b) these songs…I can’t articulate that. Over the past ten years, I have listened to The Mother, The Mechanic, and The Path from every position I can think of, like a sculpture you have to walk all the way around to get the full picture. I’ve listened to it at every point along my thread. Every time is new, different, vibrant, and brilliant. Not the same as it was in 2006. Not the same as it was when I was 12 years old. Different. It’s alive and changing. This is true because I am also alive and changing.

Okay so I feel like I’m some 500 words deep and I’ve been talking mostly about me and my life, which may be a no-no depending on who you are. While The Mother, The Mechanic, and The Path is a piece of art I hold very close to my heart, it is also a piece of art that I want everyone to experience and hopefully love. So, yes, let’s talk about the basics. The Mother, The Mechanic, and The Path is The Early November’s second full-length, the follow-up to their 2003 record The Room’s Too Cold. Given the choice between capitalizing on the momentum of The Room’s Too Cold with a streamlined rock record and creating something different and, well, crazy, the band obviously opted for the latter. The recording process, as documented in this video, was fraught with re-writes, label interjections, and in-fighting. Depending on who you talk to, it could be the reason for the band’s dissolution between 2007 and 2011.

But the record was eventually finished and released—three discs for the price of one, as the band insisted. The first disc,The Mechanic, is the band’s would-be traditional sophomore release, a taut and lean rock and roll record. The Mother focuses on some of the band’s lighter and pop-oriented tendencies. The Path insists on giving these two sides of the band a reason to co-exist on a single record, a narrative disc that explicitly reveals the story beneath the first 22 songs. The first two discs are easy enough to swallow, the third is where the band seems to lose people.

I’ve talked about it with anyone willing, and I’ve found that The Path is just something that either works for you or doesn’t. It’s a little musical without the visuals; it’s a small, isolated audio narrative that develops between a young man, Dean, and his therapist. Their conversations, or “Sessions,” are punctuated by songs that range from theatrical to simple, silly to heart-shattering. Abandoned by his parents, Dean is raised by his grandparents until his grandmother dies (in what is perhaps the pinnacle of Ace Enders’ repertoire of sadness, “Never Coming Back”) and he is reclaimed. Once Dean is grown up enough to do the abandoning, he runs from his parents and contemplates abandoning his own child. The album ends at this intersection, with the weird, grand finale of “A Bigger Meaning” and one little, maybe not too surprising, twist. It’s a story that, above all, insists on responsibility and self-awareness. It nurtures old wounds while demanding growth and fighting cycles of dangerous behavior.

I can trace so many things about myself down to The Mother, The Mechanic, and The Path. It’s the album that made music one of the most important things in my life, that showed me just how far songs and melodies and lyrics could go. It’s the thing that makes me want to write about art, that makes me want to create, that makes me want to build something that feels so far beyond my fingertips. I can reach my hand into the trove of memories I have attached to The Mother, The Mechanic, and The Path and pull up a version of myself from any point in my life—from my sister’s red mustang to my parents’ computer chair to my dorm room at 4 a.m. to right now. I can listen to this record and uncover all of the things I hope someday to be, the ways I hope to be better for everyone and for myself. I cannot accurately explain why it’s all there. I can’t tell you why the introductory bombast of “Money In His Hand” makes me sweat, why Ace’s first words (“I just can’t get this off my mind”) give me release. I can’t tell you why “The Rest of My Life” is my song of transition. I can’t tell you why I feel so connected to the world, so human when I sing “A Little More Time.” Why “The Truth Is…” and “Is It My Fault” and “My Lack of Skill” make me cry. Why “ A Bigger Meaning” makes me feel strange, awake, enlightened. I can go on and tell you every last thing this album does for me. But I can’t give you all these things. I don’t know where they come from.

But I bet you already have these things, locked away somewhere. Connected to one piece of art or maybe a few. Connected to a place, or a person, or a bunch of places or people. We are not self-contained spirits. We exist, at least partially, within the things we love. We exist in the understanding we feel, in the things that make us sweat or cry or laugh. If you know me, you at least know parts of the books I love, the people I keep close, the places in which I feel alive. We carry these things with us. We recognize each other and ourselves in these things. That’s why they’re important.

The Mother, The Mechanic, and The Path is important to me not just because it is one of those things, but also because it’s the thing that makes me grapple with all of that, that makes me dedicate a part of my life to understanding it. And I’m just glad this record exists, that it still makes me sweat and cry and laugh, even ten years later. That it has lived a million lives in me and in a bunch of other people.